Aromatherapy, a relatively young industry, faces several challenges in establishing a set of ethics, which I would like to describe.

Probably the greatest challenge exists in the fact that the products we are dealing with, essential oils, have been most commonly used as "fragrances." It is likely that more than 95% of all essential oils made worldwide are produced for the flavor, fragrance and toiletry industries. These industries are not concerned with healing; they have no particular concept of wholeness and have no explicit preference for a natural product over a synthetic one. Naturally (or unnaturally?), these industies have completely different needs regarding their raw materials than the aromatherapy industry.

When I recently had to send 2 kg of Neroli oil back to the vendor in Egypt, my shipping person asked me, "Isn't that plain fraud, what they are doing?" In a certain way it was. But when we look at this particular case, it tells us how this industry works. We found that this Neroli oil contained 6% linalyl acetate, out of which 4% came from the plant and 2% from a synthetic source (even quantities of less than 1% synthetic linalyl acetate can be detected easily with gas chromatographic chiral column analysis). The profit margins of Neroli oil, which costs several thousand dollars per kilogram, are not significantly increased by adding just 2% synthetic linalyl acetate. When discussing the issue with the vendor, it turned out they describe their Neroli oil on the spec sheet as having 5% to 15% linalyl acetate. This is the normal range for linalyl acetate in Neroli oil, and this is what the perfumer expects when he works with it. This particular batch had only 4%, however, so 2% of some synthetic (so-called "nature-identical)" material was added. On the other hand, if this had been done to increase profits, the vendor could have easily added 10%.

The aromatherapy industry is a fairly young industry in this country, but at the same it is growing at an enormous pace. We cannot expect our aromatherapists within weeks and months to have the knowledge of the ancient Egyptian adept or the Indian vaidja, who had a body of knowledge at their disposal accumulated and cared for by many generations of healers. We are in the process of reestablishing an ancient healing art. At the same time, we must make the attempt to built a bridge to modern Western botany, anatomy, physiology and biochemistry. This process necessarily takes time and requires patience from everyone involved.

With the enormous growth rate of aromatherapy, a large-scale commercialization of the industry has been unavoidable. When there is a perceived need of a product, the laws of the market demand that this need be filled, whether the suppliers have the background, experience, resources and competence to fill the need or not. There is certainly a group of committed suppliers who are constantly improving their resources and competence to do justice to the demand for a true aromatherapy product, and I see these suppliers progressively succeeding in their efforts. But when an industry grows as fast as aromatherapy is growing, it is a necessary part of the phenomenon that we see, for example, a company selling very successfully--even to health food stores--a line of 30 purely synthetic perfume oils, advertised as the purest aromatherapy products. The promotional material points to a webpage with an aromatherapy certification course, etc. Again, it will take time for things to be sorted out.

The aromatherapy industry is highly diversified. Aromatherapy today covers the following fields: the medicinal internal use of essential oils, room fragrancing, massage therapy and many other forms of holistic healing. Its largest commercial significance at the moment, however, lies in the personal care industry. The boundaries between a medicinal product and scented personal care product are not clearly defined. The standard of ethics almost necessarily varies, based on these different approaches.

There is no legislation or other regulation of what a natural essential oil has to be. Such regulation probably would not be very desirable, since neither the Food and Drug Administration nor any other governmental institution subscribes to a holistic paradigm and therefore does not have the prerequisites to formulate such a regulation. The attempt at self-regulation by the National Association for Holistic Aromatherapy (NAHA), as difficult as it appears in the face of these challenges, is therefore the most promising approach.

I would like to describe my view of how far the aromatherapy industry has progressed in establishing a set of ethics.

Considering the above-described difficulties, a considerable amount of progress has been made, with a lot of work still ahead of us. These days essential oils are rarely extended with alcohol, mineral oil, vegetable oil or other extenders. However, we do find that a large number of oils are standardized with so-called "nature identical" compounds. Oils like Neroli and Bergamot are rarely true botanical oils, and oils like Lavender, Rosemary and Ylang Ylang are often extended in this same way. Regularly, essential oils are reconstituted to an extent that the cost-cutting goal is obvious. It is my sense that the aromatherapy companies within NAHA are quite successful in keeping these oils out of their inventory; however, there is a huge problem with the rising number of aromatherapy personal care manufactures.

I recently received a phone call from a manufacturer requesting that I match the price offer of another supplier in the United States for several bulk oils, including Rosemary and Spike Lavender. The prices the other supplier was offering were less than 50% of what my distillers were charging me. At the same time, the claim of 100% purity was made from the side of this particular U.S. supplier. I offered to analyze the Spike Lavender. It contained less than 10% botanical oil! To take this problem a step further, we see an increasing number of products labeled "Aromatherapy" on the market with no botanical essential oil in it at all. Although a significant number of aromatherapists and committed manufacturers have managed to procure botanical oils, the word Aromatherapy is increasingly being abused to further commercialize the use of synthetic fragrances.

I believe that proper labeling of single note essential oils can contribute to consumer education. With testers in stores, at least the interested consumer has the chance to sample a variety of true botanical oils. Besides the botanical name, labels should display the plant part used and the country of origin. It is a good manufacturing practice to print lot numbers on bottles so every bottle can be traced to its origin. Many aromatherapy companies already adhere to these standards. 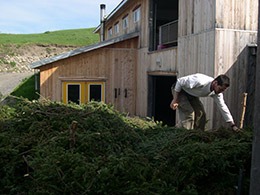 Repeatedly, articles in the National Association for Holistic Aromatherapy's (NAHA) Aromatherapy Journal discredited the labeling of oils as being from organic and wildcrafted sources. The argument was that organic oils hardly exist, if at all, and only at prices and quantities that are prohibitive for aromatherapy use, except for strictly medicinal internal use. Moreover, it has been stated that essential oils from wildcrafted sources also either do not exist or their production would endanger the particular species.

I would like to take this occasion to correct these common misunderstandings, based on my experience of working for the last 10 years with distillers around the globe. Over the last 10 years, an increasing number of distillers have been certified as organic producers. Not only in France, Italy, Spain and other European countries have distillers been certified, but also in developing countries like Egypt and Madagascar. The advantage of these oils is not only that the plants have been grown without artificial pesticides and fertilizers, but unlike most other essential oils, they have been produced for aromatherapy purposes. Their purity is ensured by the certification. The higher cost of these oils usually stays within limits. It is not different from organic vegetables. Organic farming is more expensive in some cases; in others it is not. For example, Ylang Ylang does not require any fertilization or pesticides. The oil is by default organic. A certified-organic Ylang Ylang oil requires only the cost of certification.

For wildcrafted oils, the situation is not as simple. Many oils, like the conifer oils, always come from wildcrafted plants. On the other hand, many labiatae which often are cultivated, can also be harvested from wildcrafted sources. Most of these plants are abundantly available. In Turkey alone, the annual harvest of Oregano herb from wildcrafted sources is 40 million metric tons. There is no risk of depleting the species. Spike Lavender, Rosemary, Red Thyme, and Sage are wildcrafted and distilled by both small and large distillers in Spain. Even in the situation of Helichrysum Italicum, where the increasing demand for the oil cannot be met anymore, the species as such is not endangered. The plant propagates through the roots, and this is not affected by picking the flowers. There are two endangered species from which oils are distilled: Sandalwood and Rosewood. In both cases, the threat does not come from essential oil production. In the former, the species is well protected by the Indian government (which results in limited quantities of oil being available). In the latter, the endangerment comes from the lumber industry in South America, which unfortunately is determined to produce high-quality furniture until the last Rosewood tree is cut. This essential oil is distilled from saw dust and otherwise unusable wood pieces and therefore does not increase the cutting of the trees. As is the case with Sandalwood, there are limited quantities, and a pure quality oil is difficult to procure. I believe a holistic approach will require that our ethics consider ecological, economical and social aspects of the production of the oils we are using.

Considering the young history of modern-day aromatherapy, its complex nature and its struggle to separate itself out from the fragrance industry, a highly ethical standard is being established among a significant core group of practitioners, educators and manufacturers. This is particularly true of those organized in NAHA. I believe this group has the potential to give aromatherapy the recognition it deserves of being a truly ethical healing art.