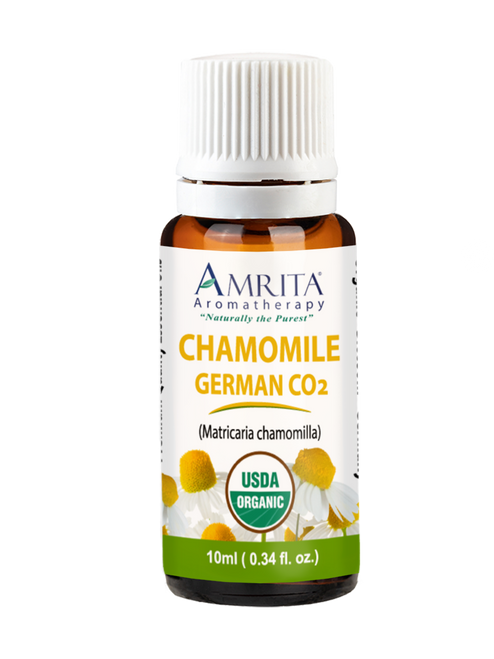 All the varieties of Chamomile are similar plants, but they have very different therapeutic effects and different chemical compositions.

The scent of German Blue Chamomile Essential Oil is heavier, spicier, and earthier than that of Roman Chamomile. The oil is also thick and inky blue in contrast to Roman Chamomile, which is lemon-colored and thin.

Both plants are short, with daisy-like blossoms on single stems, although Roman Chamomile only grows a few inches from the ground, while German Blue Chamomile can reach up to 2 feet in height.

In England, it was popular to grow Chamomile as an aromatic and cushiony alternative to grass that can be mowed completely flat. To this day, Buckingham Palace continues to maintain an all-Chamomile lawn, which dates back to the reign of King George V. Since the Middle Ages, Chamomile has been grown on stone garden benches, creating a softly padded and fragrant seat.

Chamomile tea, a kitchen cupboard staple, is made from German Chamomile, and the deceptively mild-smelling herb gives fast-acting relief to children with temper tantrums (and their parents). German Chamomile is also the preferred type of Chamomile for use in skin and hair care products.

German Blue Chamomile Organic Essential Oil has the gentle strength of a loving grandmother. It is calming to both upset stomachs and upset emotions. Soothing and anti-inflammatory, it makes the skin glow and the hair shine.

Note: Depending on the climate, CO2 essential oils can sometimes not be liquid at room temperature. If this is the case, simply run the closed bottle underneath water from the hot water tap for a couple of minutes in order to liquefy it. Please be careful not to burn yourself with the hot water. Alternatively, you can slowly lower the bottle into a saucepan of boiling water for a couple of minutes, but be careful not to burn yourself or to let the bottle touch the bottom of the saucepan.

While Roman Chamomile is mainly antispasmodic and has a much more pleasant scent, and therefore is more suitable for diffusion, German Chamomile’s predominant feature is its powerful anti-inflammatory quality. It is also muscle-relaxing. Naturally, the oil lends itself to Massage and Topical Application.

The following is a list of conditions which German Chamomile CO2 addresses by category: