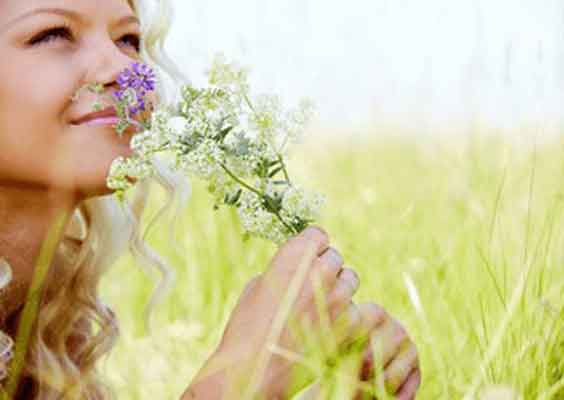 We hope you enjoy our collection of fun aromatherapy facts. You may also like to see our fun quotes. 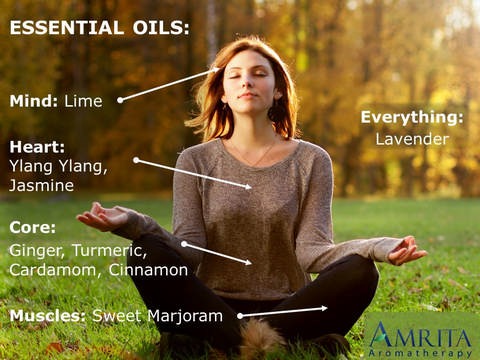 Essential oils can help you stay healthy. Traditionally Lime is good for the mind, Ylang Ylang and Jasmine for the heart, the spice oils (Ginger, Turmeric, Cardamon and Cinnamon) for the core and Sweet Marjoram for the muscles. Lavender is also useful for the body as a whole. 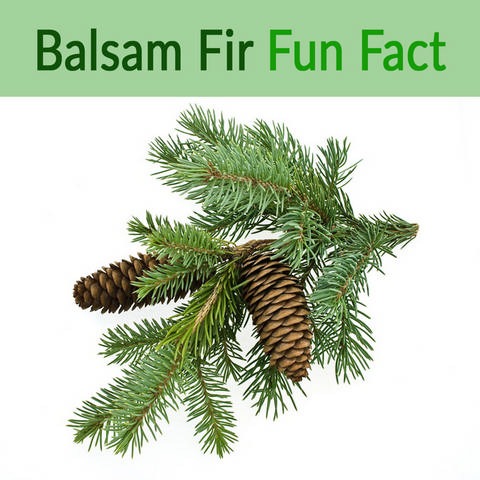 Balsam Fir has been used for centuries by Native Americans for medicine and in religious ceremonies. Fir boughs were also historically used as travelers’ camping mattresses, using the springy, freshly cut limbs and soft needles to lift bedding off the wet ground and create a pleasantly fragrant mattress or scattered over the floors of houses and churches as a clean scented covering during winter months. Sounds relaxing! 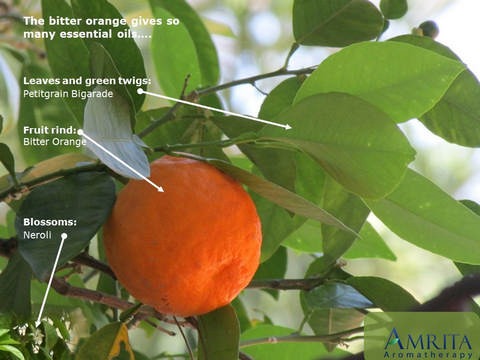 The Bitter Orange tree provides Petitgrain Bigarade which reduces anxiety and depression, Bitter Orange which is antiseptic, uplifting and stress-relieving and Neroli which has a warm, rich, bittersweet floral scent. 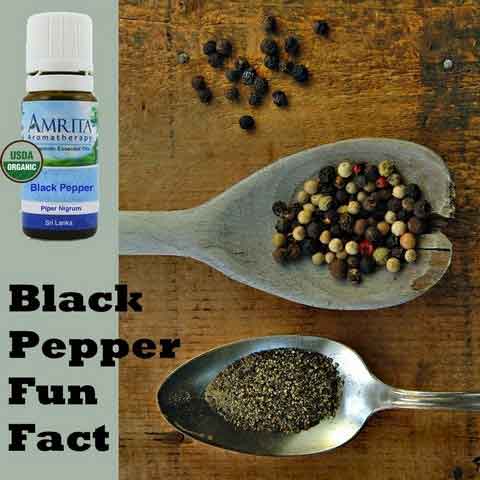 It might be hard to believe, but centuries ago black pepper was extremely valuable! Black pepper was used as a currency in medieval Europe traded ounce for ounce for gold and it is said that Attila the Hun, leader of the Hunnic Empire, asked for 3,000 pounds of pepper as part of his ransom for the city of Rome. While pepper isn't that valuable anymore, it is a wonderful essential oil to have! Black pepper can ease your pains and bruises after a long day out in the garden or an active summer day. It also soothes digestive problems and boosts the immune system.

The camphor laurel tree gives us so much. The same tree gives different oils depending on where it’s grown. From its wood, it gives Camphor Essential Oil which is known to be pain-relieving, antiseptic and energizing and Ho Wood (not sold by Amrita) which has high levels of high in linalol and is calming. From its leaves (in Madagascar), it gives Ravintsara which is high in cineole and is said to ease congestion and soothe joints and muscles, it is in particularly recommended for viral infections like colds, flu and shingles. This is not to be confused with Ravensara Aromatica which is from a different plant. 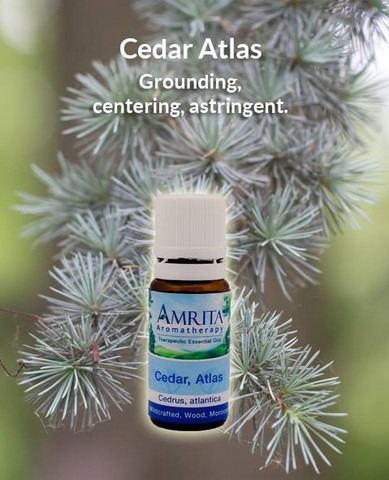 The word Cedar appears in the Bible frequently as a symbol of glory, strength and royalty. In the Latin, Greek, Arabic and Hebrew languages, the words for cedar are some version of “stand firm” and “power.” In the religious texts, these are often meant in a spiritual sense. 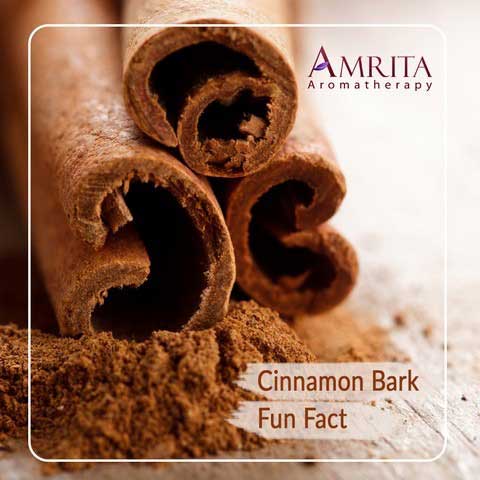 Cinnamon has a long and fascinating history. The ancient Egyptians used cinnamon in mummification and as referenced in The Complete Guide to Aromatherapy, Battaglia wrote, "the Arab traders, who kept its origin a secret, supplied the spice to the Greeks and Romans. The quest for cinnamon was pursued so enthusiastically that it was the principal incentive of the Portuguese in discovering the route around the Cape to India and Ceylon.” 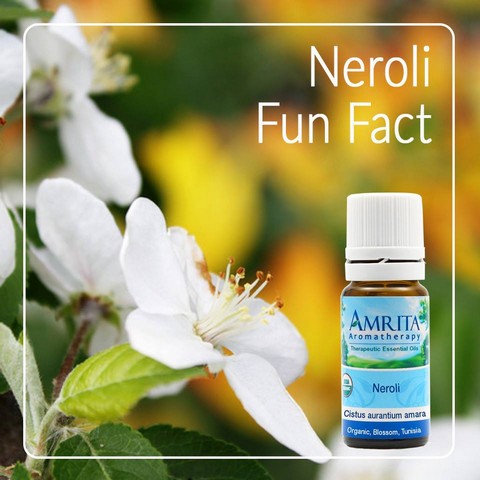 Have you ever wondered where the name "Neroli" came from? This essential oil is distilled from fresh orange blossoms. It was discovered in the 17th century and was named after Anna Maria de la Tremoille, Princess of Nerola, who used it liberally on her gloves, stationary and scarves. It is a harmonizing, calming scent that soothes anxiety, reduces insomnia, and calms digestion. 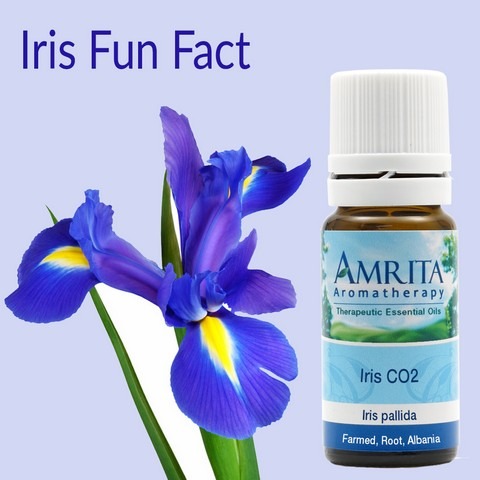 The Egyptians cherished the sweet Iris, believing it was a symbol of power and majesty. They used it in perfumes, incense and as a body spice. 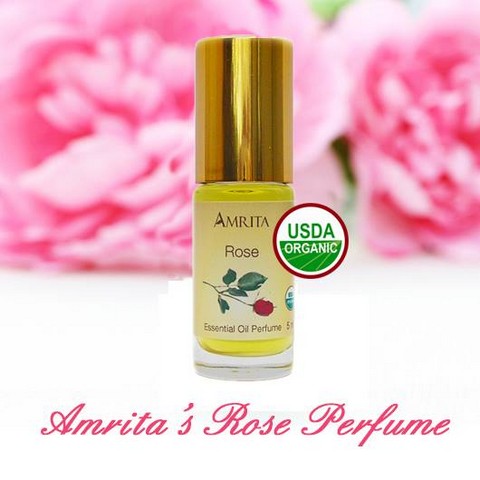 Cleopatra filled her ship with thousands of rose petals before she floated down the Nile to meet Marc Anthony. Rose calms and cools the mind, heals emotional wounds, opens and restores faith to the heart. It is sensual and an aphrodisiac. 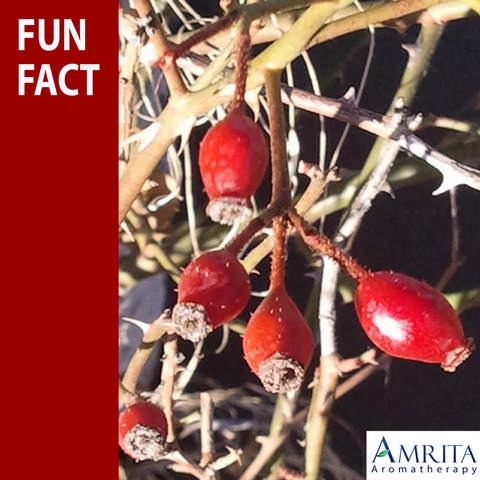 Which oil is rich in Omega 3? Certified Organic Rosehip Seed Oil. It’s luxurious and regenerative for fine and aging skin. It needs to be kept refrigerated. 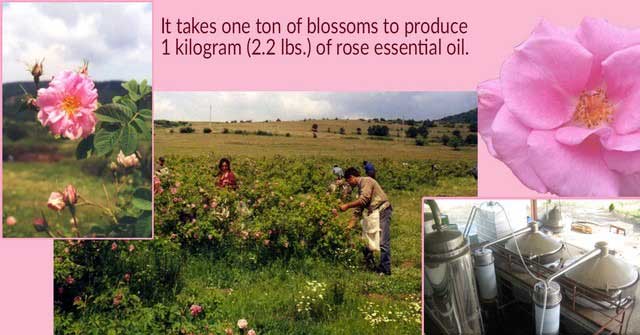 Dr. Streicher, founder of Amrita Aromatherapy, visited Amrita's Rose Otto essential oil source in Bulgaria and was able to witness the harvesting and production of the essential oil. These are some photos from his trip as well as an interesting fact about rose essential oil!

In Indonesia, due to its aphrodisiac qualities, it is traditional for newlywed couples to find Ylang Ylang blossoms spread on their marriage bed. Indonesians also immersed the blossoms in coconut oil until it absorbed all the fragrance. The oil was then used to prevent fever and infectious diseases. To learn about the amazing benefits of Ylang Ylang and ways to use it, click here.